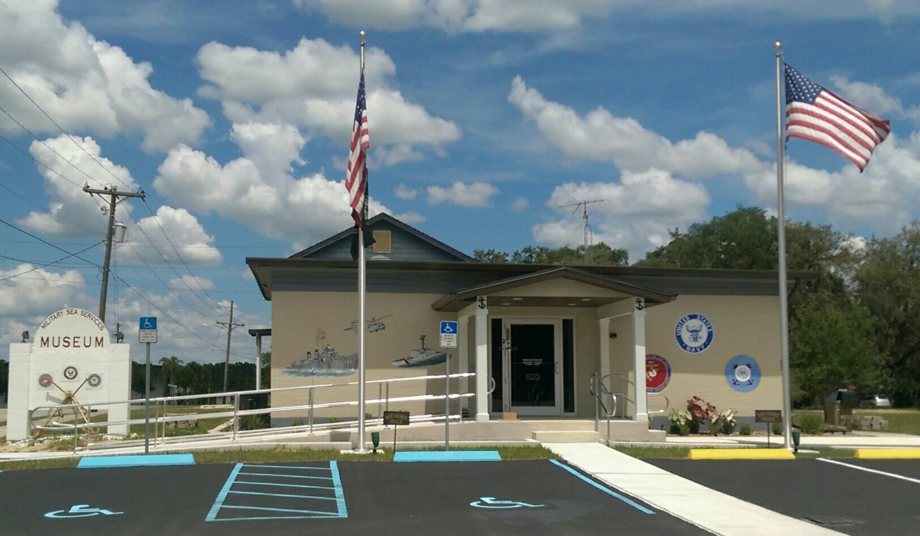 The building that now houses the Military Sea Services Museum, Inc. (Museum) evolved from Branch 173 of the Fleet Reserve Association (FRA) in Sebring, FL. During the early 1990’s, members of Branch 173 discussed the idea of displaying their memorabilia to “dress up” the building and promote the military sea services.

The “word” spread like wildfire and before long we were inundated with artifacts consisting of state flags, posters, and other military items that were donated by other FRA Branches, individuals, and individual states.

Additionally, Navy; Marine Corps; and Coast Guard uniforms; and other sea services memorabilia found their way out of closets and attics. The growing collection prompted a small group of Branch 173 members to consider creating a museum. They all agreed that the idea had merit and should be explored. And so it started!

After innumerable hours of sweat and toil, the makings and looks of a museum came together. On Memorial Day of 1998, we had our “Grand Opening.” A small but promising crowd attended the opening. It was enough to give us the incentive to continue with the organization and expansion of the Museum. At that point, we all came to the realization that we would have to break ties with the FRA because the Museum was monopolizing the majority of the building.

On 19 September 2000, the Museum was incorporated as a non-profit Florida Corporation. Soon thereafter the building lease was changed to make the Museum the prime lessee and Branch 173 of the FRA a tenant. No sooner had we finally organized and constructed the Museum to a point where the entire community was beginning to recognize us, Hurricane Jeanne hit the building really hard in September 2004 causing extensive damage.

In April 2005 a contractor commenced the enormous task of rebuilding most of the Museum. The end result was so outstanding that visitors who had previously toured the Museum could hardly believe the transformation.

One new addition was the creation of the “USS Highland Room.” The USS Highlands (APA-119) was an attack transport commissioned during WW II and named after the county in Florida where Sebring and the Museum are located. This ship participated in many battles in the Pacific, including Iwo Jima and Okinawa. It was also one of the many ships to view the signing of the formal surrender documents in Tokyo Bay on 2 September 1945 aboard the USS Missouri (BB-63).

In August 2005, the “new” Museum had its “Grand Re-Opening” for the public. This time the attendance was considerably greater. City and County officials were present for the opening ceremonies. “Amazing” was the popular word of the day. You cannot fully appreciate the Museum unless you take the time to visit it. So if you are anywhere near Sebring,  please stop in. You will not be disappointed.